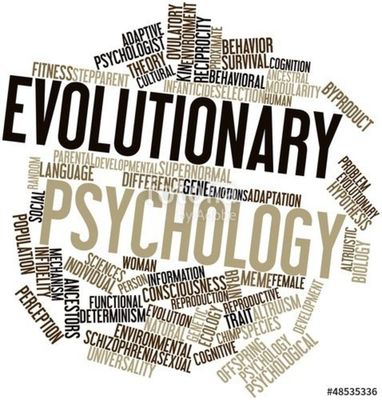 Evolutionary psychology is a psychological theory that includes the ideas that men and women are different physically, psychologically, and emotionally in certain key ways. These differences evolved over many thousands or millions of years of human evolution and exist instinctively and genetically because these traits promoted successful survival and reproduction over the years in some fashion. Each complimentary trait somehow helps each gender best promote reproduction, healthy offspring, and the ability to survive and live as long of a life as possible.

In our church—The Church of Jesus Christ of Latter-Day Saints—we can basically agree with these differences existing for survival. However, rather than assuming these traits exist in an evolutionary way over millions of years, we better understand these differences as simply being eternal and spiritual. The Proclamation to the World states clarifies the church’s stance on gender differences in the following way: All human beings—male and female—are created in the image of God. Each is a beloved spirit son or daughter of heavenly parents, and, as such, each has a divine nature and destiny. Gender is an essential characteristic of individual premortal, mortal, and eternal identity and purpose.

Sex differences are, of course, a matter of degree rather than kind. Nevertheless, the following are some research based evolutionary traits of men and women that you might want to learn about, take notice of, and work to appreciate.

*Males are more aggressive than females (theoretically because they can gain greater access to females by competing violently with other males).

*Males are thought to be more willing to engage in casual sex because they can greatly increase their reproductive output by doing so.

*Males are more likely to prefer a physically attractive partner, where the features considered most attractive in females are signals of higher fertility, such as youth and physical health.

* Ancestral sex roles have led to sex differences in care styles where men are things-oriented, focusing on disease management.

*Since men's parental investment in reproduction is less than women's, owing to human sperm being much more plentiful than eggs, and the fact that men devote considerably less energy towards the creation of offspring, men will tend to be less selective in their choice of mates than women.

*Males regardless of age engaged in more physical and verbal aggression, as well as engaging in more unprovoked aggression at higher frequency.

* In personality tests, men consistently report lower neuroticism, agreeableness, warmth, and openness to feelings, as well as higher assertiveness and openness to ideas.

*Men demonstrate less empathy across studies and perform worse than women in tests involving emotional interpretation, such as understanding facial expressions, and empathy.

*Regarding emotion, men reported less intensity of both positive and negative affect than women, and less intense and frequent experience of affect, joy, and love. However, they also experienced less embarrassment, guilt, shame, sadness, anger, fear, and distress. Experiencing pride was more frequent and intense for men than for women.

*Men have a more utilitarian reasoning because of lower male affective response and a greater acceptance of harm-based behaviors.

*Childhood conduct disorder and adult antisocial personality disorder as well as substance use disorders are more common in men since men tend to externalize stress.

*Females are thought to be less willing to engage in casual sex because they can benefit more from being choosy due to the demands of pregnancy and breastfeeding.

*Females are more likely to prefer a partner who is taller and of higher status, because such males have traditionally acted as better protectors and providers.

*The desire to form interpersonal affiliation underlies female preference for occupations that involve psychosocial care for people in need.

*Ancestral sex roles have led to sex differences in care styles where women are people-oriented, focusing on psychosocial management.

*Since women's parental investment in reproduction is greater than men's, owing to human sperm being much more plentiful than eggs, and the fact that women must devote considerable energy to gestating their offspring, women will tend to be much more selective in their choice of mates than men.

*In memory tests, females have been found to have an advantage in recalling auditory and olfactory stimuli, experiences, faces, names, and the location of objects in space.

*Women have been found to engage in less physical and verbal aggression while engaging in more indirect aggression such as rumor spreading or gossiping.

*In personality tests, women consistently report higher neuroticism, agreeableness, warmth, and openness to feelings, as well as lower assertiveness and openness to ideas.

*Women demonstrate greater empathy across studies and perform better than men in tests involving emotional interpretation, such as understanding facial expressions, and empathy.

*Regarding emotion, women reported greater intensity of both positive and negative affect than women, and more intense and frequent experience of affect, joy, and love. However women also experienced more embarrassment, guilt, shame, sadness, anger, fear, and distress. Experiencing pride was also less frequent and intense for women than for men.

*Regarding morality, women tend towards a more care-based morality, usually based on the fact that women have more deontological reasoning (meaning, a greater female affective response and rejection of harm-based behaviors.

Accepting that different gendered traits naturally exist between men and women and learning what these differences are is helpful to understanding why the opposite sex tends to act and be certain ways. It also helps to minimize hurt feelings, misunderstandings, confusion, and contention. To not take gender differences so personally or negatively. As the French would say, “vive la difference” (enjoy the difference)! Remember that these differences are purposeful from the Lord and meant to assist and we are to complement each other as men and women. Because “…neither is the man without the woman, neither the woman without the man, in the Lord.”—1 Corinthians 11:11.