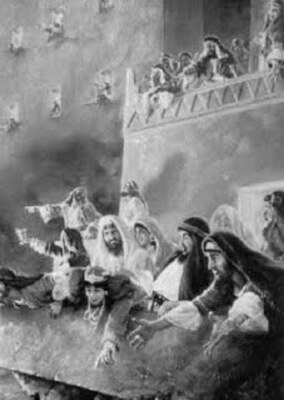 In Lehi and Nephi’s vision of the tree of life, a metaphorical image is given of a “great and specious building”. In this building, many popular, trendy, well dressed inhabitants cast ridicule, scorn, shame, and put downs to those holding onto the iron rod on the path towards the tree. Worldly views, attitudes, and philosophy was cast on the righteous in an attempt to lead them astray from eternal life. Accordingly, we read from Lehi’s vision:

And I also cast my eyes round about, and beheld, on the other side of the river of water, a great and spacious building; and it stood as it were in the air, high above the earth. And it was filled with people, both old and young, both male and female; and their manner of dress was exceedingly fine; and they were in the attitude of mocking and pointing their fingers towards those who had come at and were partaking of the fruit. And after they had tasted of the fruit they were ashamed, because of those that were scoffing at them; and they fell away into forbidden paths and were lost…And he also saw other multitudes feeling their way towards that great and spacious building. And it came to pass that many were drowned in the depths of the fountain; and many were lost from his view, wandering in strange roads. And great was the multitude that did enter into that strange building. And after they did enter into that building they did point the finger of scorn at me and those that were partaking of the fruit also; but we heeded them not. These are the words of my father: For as many as heeded them, had fallen away.
--I Nephi 8:26-28, 31-34

And in Nephi’s subsequent vision:

So, the people in the building dress well, are well spoken, and issue forth the “wisdom of the world” in the attitude of “mocking, finger pointing, scoffing, scorn, and pride”. Furthermore, we also learn from Isaiah that in the last days, evil would be called good, and good would be called evil. Accordingly:

Woe unto them that call evil good, and good evil; that put darkness for light, and light for darkness; that put bitter for sweet, and sweet for bitter! Woe unto them that are wise in their own eyes, and prudent in their own sight! Which justify the wicked for reward, and take away the righteousness of the righteous from him! Therefore as the fire devoureth the stubble, and the flame consumeth the chaff, so their root shall be as rottenness, and their blossom shall go up as dust: because they have cast away the law of the Lord of hosts, and despised the word of the Holy One of Israel.
--Isaiah 5:20-21, 23-24

Accordingly, the world today has issued forth numerous negative ideas and attitudes towards marriage that I invite you to notice, challenge, and reject. I invite you instead to value marriage, search for a healthy marriage—ideally in the temple—and nourish and stay committed to your marriage in spite of worldly ideas and philosophy on the subject. Some of these worldly ideas to reject include the following:

*You don’t need to get married, just live together. That way you don’t have to deal with the government and if it doesn’t work out, you can just easily leave.
*A marriage is just a piece of paper and means nothing. Living together is just as good if not better.
*You need to have sex before marriage and a lot of it. That way, you can test and know your sexual compatibility before marriage, which is just smart and practical.
*There are many more genders besides male and female. Even more than straight, gay/lesbian, and bisexual. In fact, they are discovering new genders all the time. Therefore, a good marriage is any two people or more.
*Gay marriage is acceptable and equivalent to male/female marriage and to stand up for traditional marriage as the ideal makes you a hateful and discriminatory.
*It doesn’t matter if you get married in the temple. In fact, it is wrong and unfair that some friends and family members couldn’t attend the temple ceremony. So just get married civilly.
*Polyamory/open relationships are perfectly fine and acceptable, whether you are married or not. In fact, adding extra partners into your marriage will just spice up your marriage so that is a good choice.
*If you are bored in a marriage and a new, more exciting option comes along, it is OK to leave your marriage for this other person because you “deserve to be happy”.
*If a first marriage doesn’t work out, that is fine. It was just a “starter marriage” anyway. That marriage is fine to dispose of, so go find a better.

There are many more worldly attitudes towards marriage than these few examples. The main point to remember is that worldly attitudes towards marriage often conflict with what we know to religiously and spiritually on the subject, where marriage is to be sacred and full of commitment, nurturance, and love. And remember that “…neither is the man without the woman, neither the woman without the man, in the Lord.”—1 Corinthians 11:11.