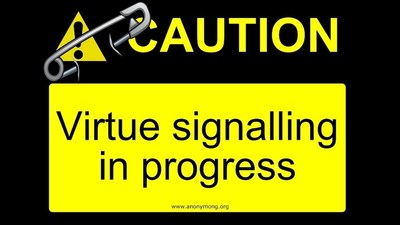 Among religious members, virtue signaling is pretty common and prevalent. The same could be said among groups of singles. If you combine the two together, virtue signaling becomes commonplace among single members of our church. Why do people do this? Partly because of insecurity, but mainly as an effort to make them more attractive or impressive in some fashion—although the opposite effect often occurs. In single church circles specifically, the aim is often to come across as more spiritual, caring, or sensitive in an effort to appear to be a “good catch” for a relationship. Virtue signaling often backfires when someone sees through it, as it often comes across as disingenuous and/or manipulative. “Humble bragging” is another phrase describing virtue signaling and it reveals insecure, prideful, and/or selfish motives in disguise.

So, what exactly is “virtue signaling”? It is, literally, making some kind of outer, noticeable words or gestures to somehow “signal” (demonstrate) one’s virtue. From the Urban Dictionary, virtue signaling is further defined and clarified as follows: “To take a conspicuous but essentially useless action ostensibly to support a good cause but actually to show off how much more moral you are than everybody else. Example:
Fred: I see George has changed his profile picture to show his support for refugees.
Barbara: Has he donated money or time? Is he giving English lessons? Is he making a room available?
Fred: No, no, he's just virtue signaling. (Source: https://www.urbandictionary.com/define.php?term=Virtue%20Signalling).

Virtue signaling among religious circles is not new. We read in the New Testament examples of when Christ preached against this. Here are two instances, along with Christ’s recommendations to act otherwise:

Then spake Jesus to the multitude, and to his disciples, Saying, The scribes and the Pharisees sit in Moses’ seat: All therefore whatsoever they bid you observe, that observe and do; but do not ye after their works: for they say, and do not. For they bind heavy burdens and grievous to be borne, and lay them on men’s shoulders; but they themselves will not move them with one of their fingers. But all their works they do for to be seen of men: they make broad their phylacteries, and enlarge the borders of their garments, And love the uppermost rooms at feasts, and the chief seats in the synagogues, And greetings in the markets, and to be called of men, Rabbi, Rabbi. But be not ye called Rabbi: for one is your Master, even Christ; and all ye are brethren. And call no man your father upon the earth: for one is your Father, which is in heaven. Neither be ye called masters: for one is your Master, even Christ. But he that is greatest among you shall be your servant.
And whosoever shall exalt himself shall be abased; and he that shall humble himself shall be exalted.
--Matthew 23:1-12

After you assess and have self-awareness that you are virtue signaling, to quote Elder Uchtdorf, “stop it” (see: https://www.churchofjesuschrist.org/study/general-conference/2012/04/the-merciful-obtain-mercy?lang=eng). Be true yourself and others. Act in good ways around others that you would also do alone and/or even if others wouldn’t notice. True humility demonstrates privately and doesn’t brag. True efforts showing morality and charity have the primary incentive to love, care for, nourish, and nurture, rather than to impress.

If you are truly a good and moral person, that will shine through on all its own. Also, when you shine naturally with the Spirit, that will sell you all on its own. Act truly loving without trying to convince others. And again, act around others the way you would act alone or if you thought they weren’t watching/listening. BE a good person rather than trying to come across as a good person. Do so and you can and will eventually attract another with similar attributes. And remember, “…neither is the man without the woman, neither the woman without the man, in the Lord.”—1 Corinthians 11:11.